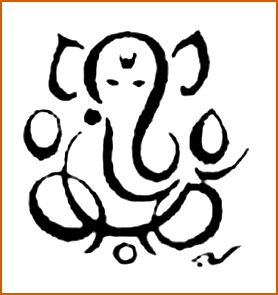 His next incarnation was of Vikata(”The mishappen”), who subdued Kama, the demon of desire. The demon named Kamasura, i.e. the embodiment of lust, was born out of the seeds of Lord Vishnu. Like all other demons he was accepted by the preceptor Sukracharya as his disciple. Kamasura performed penance on Lord Shiva and after long and arduous austerities he was blessed by the Lord. He became the supreme ruler of the three worlds. He was ceremoniously married to Trishna, the daughter of Mahishasura, and begot two sons in her, viz. Soshana and Dushpoora. The Devas, tormented by his rule, approached Mudgala Rishi for showing them a way out. The teacher advised them to meditate on the mantra OM at a place called Mayuresa Kshetra. Pleased by their devotion. Lord Ganesha appeared to them in the form of Vikata, and brought about their salvation.