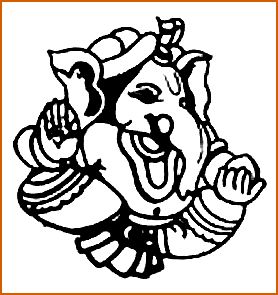 The next incarnation was in the form of Ekadanta (single tusked) who defeated the demon Madasura. The famous sage Chyavana created Madasura.The Asura sought his father’s permission and went to Sukracharya, who was Chyavana’s brother as well as the preceptor of the Asuras. He prostrated to the Guru and expressed his desire to become the ruler of the whole universe. Sukracharya was pleased with his nephew’s submission and initiated him into the Shakti Mantra Hrim. Madasura did penance on this mantra for thousands of years.At last the deity of Shakti, appeared, before him and blessed him with the fulfillment of all his desires. Thereafter the demon went about raging battles against all the kings and the gods, and was victorious everywhere. He thus became the ruler of all the three worlds. In his reign, all virtues and righteousness disappeared from the world. He married Saalasa the daughter of Pramada Asura and begot three children in her, viz. Vilasi, Lolupa and Dhanapriya. The worried gods approached Sanat kumara and sought his advice to overcome their plight Sanatkumara instructed them to propitiate Lord Ekadanta and seek his protection.He also described the glory of Ekadanta thus “Eka stands for Maya the “embodied”. and Danta for Truth (Satta). Thus Ekadanta represents the Supreme Truth which wields the Maya.” The Devas then meditated upon the Lord Ekadanta for hundreds of years. Pleased by their devotion the Lord appeared before them and assured them that He would remove their miseries. Narada, the celestial saint, promptly informed Madasura of the boon given to the gods by the Lord and prompted him to wage war against Ekadanta The demon got ready for a battle with the Lord. But alas as soon as he reached the battlefield and beheld the terrible form of Ekadanta, all his courage drained away and he surrendered to the Lord.The demon then gave up the worlds held under his reign, and sought the Lord’s protection. The Lord then told Madasura : “Don’t stay in a place where I am worshipped in a Satwic manner. You are free to enjoy the fruits of all actions done with Asuric Bhava”.