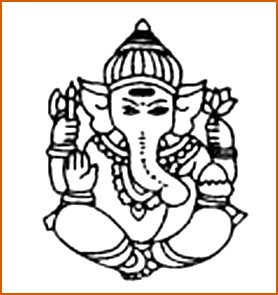 Equally perplexing in the tangled web of intergenerational sexuality is the next tale, of the avatar of Gajanana or Gajavaktra who defeated the demon Lobhasura (Greed or Covetousness). Gajanana means “the Lord with an elephant face”, and Lobha was the demon of greed. Kubera, the Treasurer of the heavens, once visited Kailasa, the abode of Lord Shiva. There he was blessed with the vision of the Lord and Goddess Parvati. Parvati was so beautiful that Kubera looked at Her with lustful eyes. The Mother became angry at this, and Kubera shivered with fear. From the fear of Kubera, there manifested a demon named Lobhasura. Lobhasura descended to the world of Asuras, where he received his education from Sukracharya, the guru of Asuras. He was initiated into the mantra “0m Namah Shivaya”. The demon then performed penance and in due course the Lord appeared and blessed him with the boon of fearlessness. The demon Lobha now went about conquering the three worlds and became the sovereign ruler. He sent word to Lord Shiva that he would like to rule over Kailas, and that it would be better if He relinquished His abode. The Lord thought for a while and decided to leave His abode. The gods, tyrannised by the demonic rule, approached sage Raibhya who instructed them to pray to Lord Gajaanana. The Devas invoked the grace of the Lord and sought His protection. The Lord blessed them, and sent Vishnu as His messenger to the demon to apprise him of the strength of Gajaanana Lobhasura was convinced of the Lord’s strength and surrendered without putting up a fight.