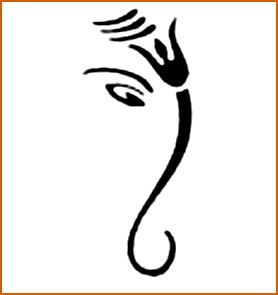 Once upon a time Lord Vishnu had assumed the form of Mohini, the enchantress, to delude the demons. When Lord Shiva beheld this seductive form. He was struck with passion. Vishnu immediately gave up the Mohini form and assumed His usual form. Shiva became sad and angry. Out of the seeds of His disappointment was born a terrible demon Krodhasura. This demon invoked the grace of the Lord Sun and became a powerful king. He married “Preeti” the beautiful daughter of Sambara and begot two sons in her—- Harsha and Soka. The gods undertook penance to invoke the grace of Lord Ganesha in the form of Lambodara. The Lord appeared before them and for the sake of the world, subdued Krodhasura.