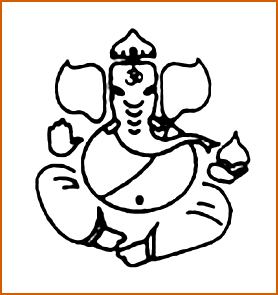 The 7th incarnation of Ganesha Vighnaraja had a very unusual mode of conveyance – a Sheshnaag or Shasha. In this lifetime Ganesha managed to subdue the demon Mamasur (also known as Mamtasur or Mama), the demon of the ego. This is His (Ganesha’s) most popular incarnation, known as The Remover of Obstacles. Riding his vehicle called Sheshnag, a serpent, he strode into battle with Mamtasur, and overcame him.” Parvati Devi, the daughter of Himavan, was married to Lord Shiva.

After the marriage, one day when She was relaxing in the company of Her friends. She burst out in laughter in a playful mood, and out of Her laughter was born a handsome male form He prostrated to the Mother She was surprised at this manifestation of the form and asked him who he was and what he wanted. He said that he was born from Her laughter and asked Her as to how he could serve Her. She named him Mama, as he was born out of her outburst, when She was swayed by “Maan”, the sense of I-ness, Ego. She then instructed him to remember Lord Ganesha always, who would fulfill all his desires. Mama retired to the forests to meditate on Lord Ganesha. On the way, he met Sambara Asura, who managed to allure him into the Asuric cult and initiated him into the demonic methods of worship. Thus Mama of angelic nature became Mamasura, the demon. He married Mohini, the daughter of an Asura chief in due course he became the ruler of alt the three worlds. The Devas who were exiled from their worlds propitiated Lord Ganesha, Who incarnated as Vighnaraja, subdued Mamasura and established righteousness and peace.