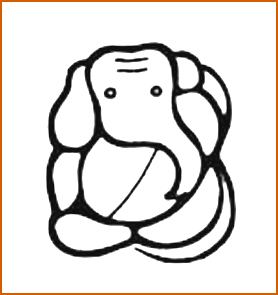 Ganesha has a mouse as his mount here. His life mission this time around was to defeat the demon Ahamkarasur, the demon of self-infatuation.
Once, Brahmaji, the grandsire, bestowed on the Sun deity, the lordship over the ‘world of activities’. One day, a thought dawned in the mind of Sun: “All the worlds are governed by Karma—-activities; and by virtue of my being the Lord of Karma Rajya, I can consider myself to be the supreme governor of all the worlds.
As this thought passed his mind, he happened to sneeze and out of the sneeze there arose a demon. He went down to the world of Asuras and Sukracharya gave him the name “Aham” on account of his birth from the ego of  Sun. He meditated on Lord Ganesha, who appeared before him in the form of Dhumravarna and blessed him to be the sovereign ruler of all the three worlds. Aham married “Mamata”, daughter of Pramadasura, and begot two sons in her named Garva and Sreshta. Tired of the demonic rule of Aham, the Devas meditated upon Lord Ganesha for salvation, and the Lord descended to their rescue- Ere long, Lord Ganesha in the form of Dhoomravarna subdued the demon Aham.