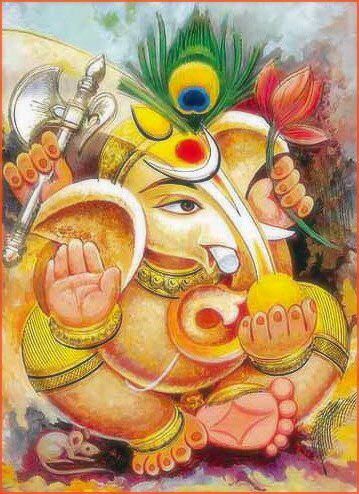 Ganesh is the Ever-Blissful, elephant-headed deva (god) who is lovingly worshipped and revered by millions of people worldwide. Although Ganesh is known through the Hindu religion, Shri Ganesh transcends religion and is loved by many non-Hindu’s. Ganapati is worshipped by both Vaishnavas (devotees of Vishnu) and Saivites (devotees of Shiva). It is for this Transcendent, All-Embracing, Auspicious Lord of the Ganas, Sri Ganesh, for whom this site is dedicated. Enjoy and much Peace to you!

The son of Shiva and Parvati, Shree Ganesh, is the God of Good Luck and Auspiciousness and is the Dispeller of problems and obstacles. He is also worshipped as the God of wisdom, wealth, health, celibacy, fertility and happiness. In the panchayatana puja, Ganesh is glorified as one of the five prime Hindu deities (Brahma, Vishnu, Shiva, Shakti and Ganesha) whose worship confers immortality and liberation.

Devotees of Ganesha are known as ‘Ganapatyas’, and Ganesh Chaturthi (also known as Ganesha Chaturthi or Vinayaka Chaturthi) is the holy festival that celebrates His Glory through India by all Hindu’s. Vinayak Chaturthi is celebrated on the 4th day of the bright half of Bhadrapad. This festival is honored as the birthday of Sri Ganesh. Ganapati transcends all sects and views and is equally worshipped by both Saivites and Vaishnavas because Ganesh is viewed as an Incarnation of both Vishnu and Shiva. Ganesha is even worshipped and revered among Buddhists and Jains.

Once there was neither Being nor Nonbeing. There was neither Form nor Formlessness. Then, That which was hidden within Itself, That One, stirring, emerging, coming to be. From Itself to the Formless to the Form. Immutable, changeless, everywhere, pervading all, yet not physically such is the mystery. Suddenly an ancient note piercing the darkness. A song whose birth stirred the slumbering, summoning an eternal mystery to awaken. Emerging from deep within the hidden cave, the human heart, Ganesha’s truth flows from the icecave of the infinite. Housed within our gated dwelling, Ganesha the guest loved and longed for. That which has no form, can take a form. That which has no name, can take a name. From the formless to form, and back again and again and again. The wheel of time gathers speed, and somewhere between fact and legend, vision and myth, we ask, “Who is Ganesha? There are those who lovingly sing his praises. There are those who worship and adore him. There are those who represent him in art and literature. There are those who tell stories about him. There are those who chant his glory. There are those who seek his darshana. There are those who invoke and invite his blessings. The thinkers think, the scholars scholasticise, the devotees worship. But what is Ganesha’s hidden meaning? There is a long and hoary lineage of seekers, scholars, sycophants, who have attempted to plumb the mysteries of the elephant-headed one. Anthropologists, Artists, religious Aspirants, Historians, Indologists, Linguists, Philosophers, Religionists, Sociologists, and contemporary devotees of Ganesha are but some of the most recent representatives of this enquiry. Each group has attempted, and continues to attempt, to make sense of this enormously popular deity. Seemingly incongruous facts simultaneously coincide. Ganesha embodies: An enormous popularity that transcends sectarian and territorial limits; a seemingly rather late, yet dramatic, full-blown appearance into a religious pantheon; a confusing, conflicting, yet interesting and intriguing mythology; and an elephant’s head atop a plump human body! To further complicate the picture is the fact that the physical representation of Ganesha offers more iconographic variations than does that of any other Indian deity. Couple this with the fact that Ganesha literature is rife with a seemingly endless number of stories on an unexpectedly limited number of themes. O Ganesha, who are you really? Tell the others what you want, tell them anything, but between you and me, who are you really?

What Ganesh Stands For

Ganesha has four arms which symbolize his status as the universal ruler and establish his power over the four categories of beings – those who can live only in water, those who can live in water and on earth, those who can live only on earth and those who can fly in air. Significance of four : It was god Ganesha who instituted the four castes and the four Vedas. One hymn in Sri Bhagavat Tattva , says: ‘In heaven, this child will establish the predominance over gods, on earth over men, in the nether world over anti-gods and serpents. He causes the four principles of the elements to move and is therefore four armed. In one hand, he holds a shell, in another a discus, in the third a club or a sweet and in the fourth a lotus.’ Thus, all aspects of Ganesh’s form are filled with symbolic meanings.

The Vehicle of Ganesh

Sathya Sai has said, “The mouse is the vehicle of Vinayaka. What is the inner significance of the mouse? The mouse has a keen sense of smell. The mouse is a symbol of the attachment to worldly tendencies (vaasanas). It is well known that if you want to catch a mouse, you place a strong-smelling edible inside the mouse-trap. The mouse also symbolizes the darkness of night. The mouse can see well in the dark. As Vinayaka’s vehicle the mouse signifies an object that leads man from darkness to light. The Vinayaka-principle, thus, means that which removes all the bad qualities, practices and thoughts in men and inculcates good qualities, good conduct and good thoughts.”

What does “Vinayaka” Mean

Sathya Sai says, “Who is Vinayaka? In the sloka beginning with the words, Suklaambaradharam Vishnum, only the form of the deity is described. But there is another inner meaning for the name “Vinayaka”. Suklaambaradharam means one who is clad in white. Vishnum means he is all-pervading. Sasivarnam means his complexion is grey like that of ash. Chathurbhujam means he has four arms. Prasannavadanam means he has always a pleasing mien. Sarvavighnopasaanthaye means for the removal of all obstacles. Dhyaayeth, meditate (on him). Vinayaka is the deity who removes all bad qualities, instills good qualities and confers peace on the devotee who meditates on him Vinayaka means that he is totally master of himself. He has no master above him. He does not depend on anyone. He is also called Ganapathi. This term means he is the lord of the ganas – a class of divine entities. This term also means that he is the master of the intellect and discriminating power in man. He possesses great intelligence and knowledge. Such knowledge issues from a pure and sacred mind.”

Sathya Sai says, “What is the esoteric meaning of Ganesha’s elephant head? The elephant is noted for its acute intelligence. Ganesha’s elephant head symbolizes sharpness of intellect and the highest power of discrimination. Because of the purity of his intellect, Vinayaka is also called the giver of buddhi (intellect). He responds to the prayers of devotees and hence is known as Siddhi Vinayaka (the Vinayaka who grants what is sought). In a forest, when an elephant moves through the jungle, it clears the way for others to follow. Likewise, by invoking Ganesha, the path is cleared for our undertakings. The elephant’s foot is so large that when it moves it can stamp out the footprints of any other animal. Here, again, the symbolic meaning is that all obstacles in the way will be removed when Ganesha is accorded the place of honor. The journey of life is made smoother and happier by the grace of Ganesha. When an elephant moves among the bushes, its path turns into a regular passage for all animals. It is thus a pacesetter for all animals.” Similarly, Ganesha clears the path leading to Wisdom, Intellect, and Inner Peace.

Ganesh as the Scribe

Ganesha is accepted as the god of learning and the Patron Deity of letters and scriptures. Ganesh’s tusk is used by him in the writing of the epic, the Mahabharata. When Vyasa wanted to compose the Mahabharata, Brahma suggested Ganesha be his scribe. Vyasa agreed and Ganesha brought his broken tusk as a writing quill. Vyasa dictated the entire epic in verse. Ganesha recorded every word for Gods and men alike.

32 Forms of Ganesh in Agamic Scriptures