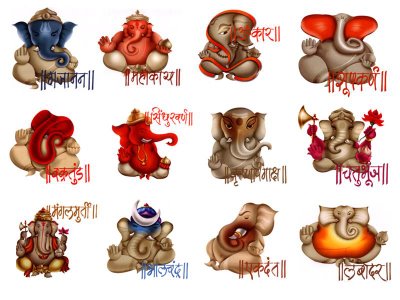 Two Shaktis of Lord Ganesh (Siddhi and Riddhi) are often depicted on images of His forms. These forms are recognized in the Agamic Scriptures (the Agamas). These texts represent a big body of scriptures written in Sanskrit and revered as words that we remembered from God –Smriti. Each Hindu denomination has its own and unique Agama texts. God’s forms may also represent a correlation with 32 paths and spheres of the Tree of Life. God as the Absolute Being is incomprehensible, so purpose of these forms is to bring the Absolute and ImmenseDivinity closer to our mind.