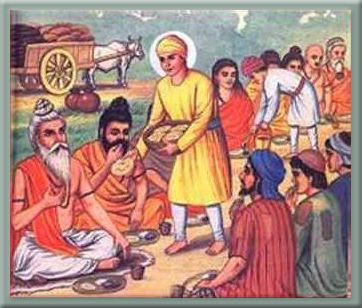 Shri Guru Nanak Dev ji was born in 1469 in Talwandi, a village in the Sheikhupura district, 65 kms. west of Lahore. His father was a village official in the local revenue administration. As a boy, Shri Guru Nanak learnt, besides the regional languages, Persian and Arabic. He was married in 1487 and was blessed with two sons, one in 1491 and the second in 1496. In 1485 he took up, at the instance of his brother-in-law, the appointment of an official in charge of the stores of Daulat Khan Lodhi, the Muslim ruler of the area at Sultanpur. It is there that he came into contact with Mardana, a Muslim minstrel (Mirasi) who was senior in age.

By all accounts, 1496 was the year of his enlightenment when he started on his mission. His first statement after his prophetic communion with God was “There is no Hindu, nor any Mussalman.” This is an announcement of supreme significance it declared not only the brotherhood of man and the fatherhood of God, but also his clear and primary interest not in any metaphysical doctrine but only in man and his fate. It means love your neighbour as yourself. In addition, it emphasised, simultaneously the inalienable spirituo-moral combination of his message. Accompanied by Mardana, he began his missionary tours. Apart from conveying his message and rendering help to the weak, he forcefully preached, both by precept and practice, against caste distinctions ritualism, idol worship and the pseudo-religious beliefs that had no spiritual content. He chose to mix with all. He dined and lived with men of the lowest castes and classes Considering the then prevailing cultural practices and traditions, this was something socially and religiously unheard of in those days of rigid Hindu caste system sanctioned by the scriptures and the religiously approved notions of untouchability and pollution. It is a matter of great significance that at the very beginning of his mission, the Guru’s first companion was a low caste Muslim. The offerings he received during his tours, were distributed among the poor. Any surplus collected was given to his hosts to maintain a common kitchen, where all could sit and eat together without any distinction of caste and status. This institution of common kitchen or langar became a major instrument of helping the poor, and a nucleus for religious gatherings of his society and of establishing the basic equality of all castes, classes and sexes.

When Guru Nanak Dev ji were 12 years old his father gave him twenty rupees and asked him to do a business, apparently to teach him business. Guru Nanak Dev ji bought food for all the money and distributed among saints, and poor. When his father asked him what happened to business? He replied that he had done a “True business” at the place where Guru Nanak Dev had fed the poor, this gurdwara was made and named Sacha Sauda. Despite the hazards of travel in those times, he performed five long tours all over the country and even outside it. He visited most of the known religious places and centres of worship. At one time he preferred to dine at the place of a low caste artisan, Bhai Lallo, instead of accepting the invitation of a high caste rich landlord, Malik Bhago, because the latter lived by exploitation of the poor and the former earned his bread by the sweat of his brow. This incident has been depicted by a symbolic representation of the reason for his preference. Shri Guru Nanak pressed in one hand the coarse loaf of bread from Lallo’s hut and in the other the food from Bhago’s house. Milk gushed forth from the loaf of Lallo’s and blood from the delicacies of Bhago. This prescription for honest work and living and the condemnation of exploitation, coupled with the Guru’s dictum that “riches cannot be gathered without sin and evil means,” have, from the very beginning, continued to be the basic moral tenet with the Sikh mystics and the Sikh society.

During his tours, he visited numerous places of Hindu and Muslim worship. He explained and exposed through his preachings the incongruities and fruitlessness of ritualistic and ascetic practices. At Hardwar, when he found people throwing Ganges water towards the sun in the east as oblations to their ancestors in heaven, he started, as a measure of correction, throwing the water towards the West, in the direction of his fields in the Punjab. When ridiculed about his folly, he replied, “If Ganges water will reach your ancestors in heaven, why should the water I throw up not reach my fields in the Punjab, which are far less distant ?”

He spent twenty five years of his life preaching from place to place. Many of his hymns were composed during this period. They represent answers to the major religious and social problems of the day and cogent responses to the situations and incidents that he came across. Some of the hymns convey dialogues with Yogis in the Punjab and elsewhere. He denounced their methods of living and their religious views. During these tours he studied other religious systems like Hinduism, Jainism, Buddhism and Islam. At the same time, he preached the doctrines of his new religion and mission at the places and centres he visited. Since his mystic system almost completely reversed the trends, principles and practices of the then prevailing religions, he criticised and rejected virtually all the old beliefs, rituals and harmful practices existing in the country. This explains the necessity of his long and arduous tours and the variety and profusion of his hymns on all the religious, social, political and theological issues, practices and institutions of his period.

Finally, on the completion of his tours, he settled as a peasant farmer at Kartarpur, a village in the Punjab. Bhai Gurdas, the scribe of Guru Granth Sahib, was a devout and close associate of the third and the three subsequent Gurus. He was born 12 years after Guru Nanak’s death and joined the Sikh mission in his very boyhood. He became the chief missionary agent of the Gurus. Because of his intimate knowledge of the Sikh society and his being a near contemporary of Shri Guru Nanak, his writings are historically authentic and reliable. He writes that at Kartarpur Guru Nanak donned the robes of a peasant and continued his ministry. He organised Sikh societies at places he visited with their meeting places called Dharamsalas. A similar society was created at Kartarpur. In the morning, Japji was sung in the congregation. In the evening Sodar and Arti were recited. The Guru cultivated his lands and also continued with his mission and preachings. His followers throughout the country were known as Nanak-panthies or Sikhs. The places where Sikh congregation and religious gatherings of his followers were held were called Dharamsalas. These were also the places for feeding the poor. Eventually, every Sikh home became a Dharamsala.

One thing is very evident. Guru Nanak had a distinct sense of his prophethood and that his mission was God-ordained. During his preachings, he himself announced. “O Lallo, as the words of the Lord come to me, so do I express them.” Successors of Guru Nanak have also made similar statements indicating that they were the messengers of God. So often Guru Nanak refers to God as his Enlightener and Teacher. His statements clearly show his belief that God had commanded him to preach an entirely new religion, the central idea of which was the brotherhood of man and the fatherhood of God, shorn of all ritualism and priestcraft. During a dialogue with the Yogis, he stated that his mission was to help everyone. He came to be called a Guru in his lifetime. In Punjabi, the word Guru means both God and an enlightener or a prophet. During his life, his disciples were formed and came to be recognised as a separate community. He was accepted as a new religious prophet. His followers adopted a separate way of greeting each other with the words Sat Kartar (God is true). Twentyfive years of his extensive preparatory tours and preachings across the length and breadth of the country clearly show his deep conviction that the people needed a new prophetic message which God had commanded him to deliver. He chose his successor and in his own life time established him as the future Guru or enlightener of the new community. This step is of the greatest significance, showing Guru Nanak s determination and declaration that the mission which he had started and the community he had created were distinct and should be continued, promoted and developed. By the formal ceremony of appointing his successor and by giving him a new name, Angad (his part or limb), he laid down the clear principle of impersonality, unity and indivisibility of Guruship. At that time he addressed Angad by saying, Between thou and me there is now no difference. In Guru Granth Sahib there is clear acceptance and proclamation of this identity of personality in the hymns of Satta-Balwand. This unity of spiritual personality of all the Gurus has a theological and mystic implication. It is also endorsed by the fact that each of the subsequent Gurus calls himself Nanak in his hymns. Never do they call themselves by their own names as was done by other Bhagats and Illyslics. That Guru Nanak attached the highest importance to his mission is also evident from his selection of the successor by a system of test, and only when he was found perfect, was Guru Angad appointed as his successor. He was comparatively a new comer to the fold, and yet he was chosen in preference to the Guru’s own son, Sri Chand, who also had the reputation of being a pious person, and Baba Budha, a devout Sikh of long standing, who during his own lifetime had the distinction of ceremonially installing all subsequent Gurus.

All these facts indicate that Guru Nanak had a clear plan and vision that his mission was to be continued as an independent and distinct spiritual system on the lines laid down by him, and that, in the context of the country, there was a clear need for the organisation of such a spiritual mission and society. In his own lifetime, he distinctly determined its direction and laid the foundations of some of the new religious institutions. In addition, he created the basis for the extension and organisation of his community and religion.