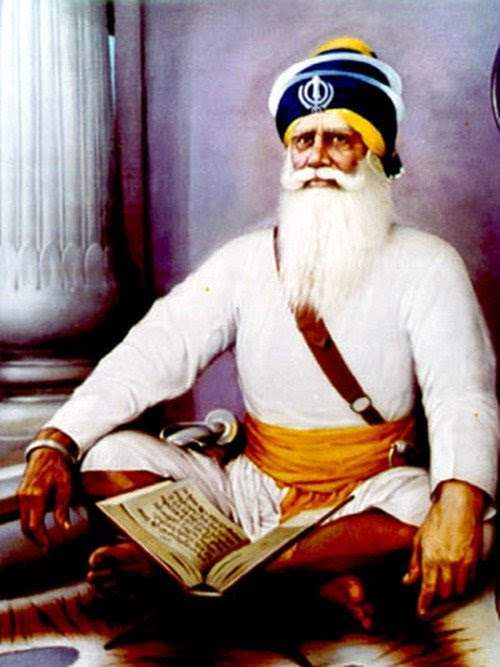 Baba Deep Singh Shahid (26 January 1682 -13 November 1757), is one of most honoured martyrs in Sikh history. He was the founder of the Shahid Misl (group). He was the first head of Damdami Taksal (Damdama school of learning)a 300 years old religious school of the Sikhs which was founded by last Sikh prophet Guru Gobind Singh.  Tall and strong he was an exceptionally brave Sikh.

A bold and fearless saint-soldier he was ever ready to risk his life for the Panth. Baba ji was born on January 26, 1682 (some records register this as January 20) and died fighting at Amritsar on November 11, 1757 when he was about 75 years old. From about 12 years of age, he grew up around the tenth Guru, Guru Gobind Singh.

He spent most of his life as a custodian of the Panth (Sikh community). He and Banda Singh Bahadur are recognised as the most honoured martyrs of the Panth who, together set a unique and amazing example for the community to follow for many generations. Not only was Baba ji a brave and fearless soldier but a very intelligent scholar who had mastered several languages.

From the time when Guru Gobind Singh came to Damdama Sahib, Baba ji was responsible for the distribution of the Guru Granth Sahib to other parts of the world and was the “head granthi” (head priest) of Damdama Sahib in Bathinda.

Today at the same spot, just south of the norteast corner of the parkarma, a large marble octagonal tile marks the spot where his head landed. Many pilgrims stop and pause here daily, as they have since his death, to sprinkle rose pedals and lay garlands on the tile as they pray in his honor.

Baba Ji was born January 26, 1682, (14 Maagh Sunmat 1739) the son of Bhai Bhagata Ji and Mai Jeoni Ji,). a Sikh couple living in Pahuvind, a village 40 km southwest of Amritsar.]] Baba Ji’s parents were hard working Sikh farmers. Their first born he was to be their only child. He was named Deepa (light). An only child, his parents lavished him with much devotion and affection. When Deepa was twelve, he traveled with his parents to Anandpur Sahib to meet Guru Gobind Singh Ji, the tenth Sikh guru. They stayed in the Guru’s city for several days, doing Sewa (service) with the Sikh community. When his parents were ready to return to their village, the Guru asked the 12 year old Deepa to stay with him at Anandpur.

He readily accepted his Guru’s request and began serving the Sikh community of the city. While at Anandpur Sahib, he immersed himself in his studies of Sikh philosophy and the Sri Guru Granth Sahib, the Sikh holy book of scriptures. He learned Gurmukhi (Punjabi script) and several other languages from Bhai Mani Singh and other Sikh scholars. It was here that he also learned the art of horsemanship, hunting and the use of the bow and other weapons.

At the age of eighteen, he received Amrit from the Panj Pyare at Anandpur Sahib on Vaisakhi day and took an oath to serve as one of Waheguru’s warriors (Akal Purakh dee fauj). With his new name, Deep Singh also learned that Sikhs are to always help the weak and needy, and to fight for truth and justice. After receiving the vows of the Khalsa, he stayed on in Anandpur to continue his studies of the sacred texts under Bhai Mani Singh. He soon became one of the Guru’s most beloved Sikhs staying in Anandpur for a total of about eight years.

In about 1702 Guru Gobind Singh ji requested that he return to his village to help his parents. He was married that same year. In 1704, about two years after his return to Pahuwind, a Sikh messenger arrived to inform him that Guru Ji had left his fort in Anandpur Sahib after fighting with the Hindu hill Rajput Rajas for six months. He also learned that the Guru’s two young sons and his mother, Mata Gujri, had become separated from the Guru during the battle. Upon hearing such disheartening news, Baba Deep Singh Ji immediately left Pahuwind to meet with Guru Gobind Singh Ji. Baba Deep Singh Ji caught up with the Guru at Damdama Sahib in Talwandi. Here, he learned that the two older sons of the Guru, Ajit Singh and Jujhar Singh, had lost their lives in the battle of Chamkaur. Guru Ji also told him that his two younger sons, Zorawar Singh and Fateh Singh and with grandmother were betrayed by a former family servant and arrested. After refusing to convert to Islam they were cruelly murdered at the orders of Wazir Khan. Having pre-known the fate of younger Sahibzadas, their grandmother Mata Gujar Kaur left for heavenly abode in thanda burj in which she and the two princes were held at Sirhind.