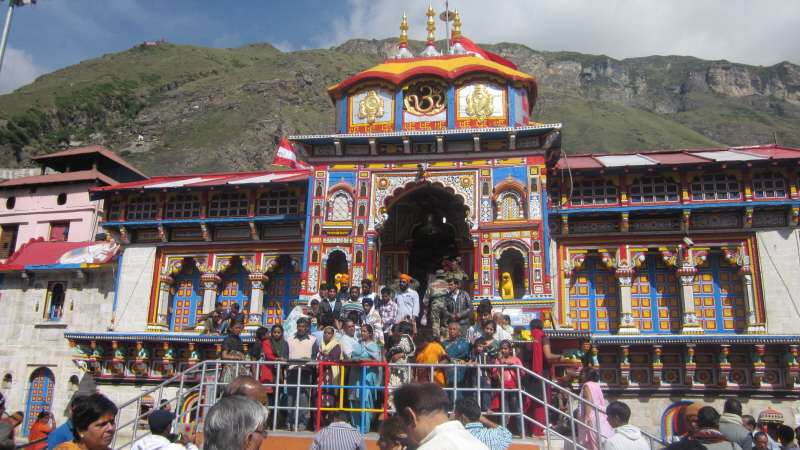 
One of the oldest of the Hindu temples is the Badrinath Dham. The temple is situated to the right side of the river Alaknanda in the state of Uttarakhand, India, at an altitude of 3133 m. The Dham is guarded by two of the mountain peaks, Nar and Narain, with the soaring Neelkanth Peak at the rear.  This spot was once floored by wild berries hence attaining the name ‘Badri Van’ or the ‘forest of berries’. The temple was built by Adi Shankaracharaya best known as the saint philosopher from the 8th century. It has been repaired many times due to natural grievances. The main gate, Singhdwar, is the chief attraction and displays vibrant colors. The temple is so old that it earns its fame since the Vedic age. The statue is made of a black stone which is somewhat similar to granite. The Alaknanda pours beneath the temple and was previously known as Vishnu Ganga.

Badrinath temple remains open from April to May every year. It is believed that there are four supplementary Badris namely, Bhavishya Badri, Yogdhyan Badri, Bridha Badri and Adi Badri. It is a famous belief that the idol of Lord Buddha was later re-established by Adi Guru in the form of a statue of Lord Vishnu. This happened after the stretch of Buddhism as the Buddhists preserved their lord’s statue through the Hindu renaissance. The fact makes it obvious for us to believe that the idol would be sitting in a Padmasan position characteristic of Buddha. It also might be interesting to know that Buddha was the ninth embodiment of Lord Vishnu himself according to the Hindu mythology.

There exists an entertaining tale about this temple. It is believed that Vishnu came to this place just like rest of he Gods for reparation. Seeing the beauty of the place he started to plot against Shiva so that he could acquire his meditating place. For a start Vishnu disguised himself as a lovely child and started sobbing loudly. Parvati, Shiva’s wife, picked him up but found it impossible to calm him. Because of the constant weeping sounds, Shiva moved to Kedarnath in frustration. The objective was achieved. According to legend, Ganga has divided into twelve channels because of a reason. When the river Ganga was asked to move down to earth to heal the distressed humankind, the pressure was not something which earth could bear. Alaknanda is one of them.

Lord Vishu came here for his penance and seeing this Goddess Laxmi turned into the Badri ( a berry tree) to provide shelter to the Lord Vishnu and to save him for adverse weather conditions. After completing his meditation, Lord Vishu noticed that there was no tree when he had started. Then through his vision he confirmed that in real that tree was goddess Laxmi and at last, happily Lord Vishu said to his wife that whenever my devotees will remember me, then they will first take your name and then mine and hence the place is called as BadriNath- Badri (Laxmi), Nath(Vishu ji).

There are three parts inside the temple called the Garbha Griha, the Darshan Mandap and the Sabha Mandap.
The Garbha Griha – This area covered with gold sheet presented by Queen Ahilyabai. There is an attractive image of Lord vishu, which is 1 metre in height.
The Darshan Mandap – Here lord Vishnu is sitting in padmasana (a yogic posture). Other images are of Uddhava, Narayana, Narad muni, Lord kubera( lord of wealth), Silver Ganesha and Garuda.
The Sabha Mandap – Here devotees assemble for worshipping the god.

Apart from the main temple, there are lot more places to ramble around like
Tapt Kund- It is the holy dip for devotees to relax in and it is customary to take dip before worshipping.
Neelkanth- It is snow peak behind the temple,
Sheshnetra, Charanpaduka and many other beautiful places. The best time to visit this beautiful Badrinath temple is between May to October, as the Kapat or the door of temple remain opened from starting of May to the second week of November.