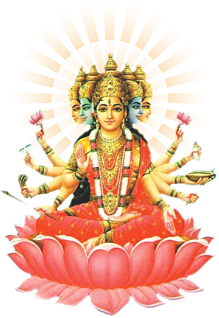 Gayatri Devi is an incarnation of Saraswati Devi, consort of Lord Brahma, symbolising the “shakti” (strength) and “dev” (quality) of Knowledge, Purity and Virtue. Saraswati Devi is held to be the patronness of the Arts, being a poet and musician, as well as skillful composer. In the form of Gayatri Devi, with the blessings of Lord Brahma, she is believed to have given the four Vedas to mankind.

Gayatri, Savitri and Saraswati are three goddesses representing the presiding deities of the famous Gayatri mantra chanted thrice a day.

Gayatri is the presiding deity of the morning prayer and rules over the Rigveda and the garhapatya fire. Every grihasta (householder) was expected to keep 5 or 3 sacred fires ( Five fires: ahavaneeya, dakshagni, garhapatya, sawta, aavasadha.) in his house to perform Vedic rituals.In Sanskrit, there are definite rules that regulate poetry: rhyme and meter are not written whimsically. The Gayatri Mantra has a Vedic metre of 24 syllables. Amongst the regulated poetry, the Gayatri mantra, chanted by properly qualified persons, is the most prominent. The Gayatri mantra is mentioned in the Srimad Bhagavatam. Great sins are said to be expiated by a pious recitation of this Gayatri verse which reads as follows:

Gayatri mantra is meant for realization of God and is regarded as representing the Supreme Lord. It is meant for spiritually advanced people. Success in chanting it enables one to enter the transcendental position of the Lord. But, in order to chant the Gayatri mantra, it is necessary for one to first acquire the qualities of the perfectly balanced person in terms of the qualities of goodness according to the laws of material nature. The Gayatri mantra is considered to be the sonic incarnation of Brahman and is regarded as very important in Vedic civilization.