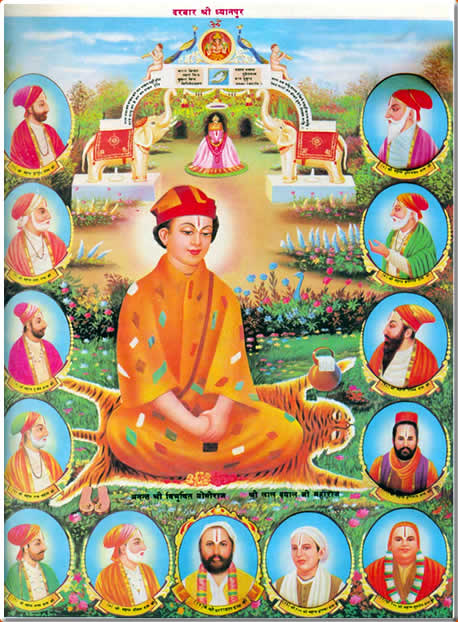 His father Bohlamal and mother Krishna Devi were filled with absolute supreme bliss with the appearance of Shri Bawa Lal ji. Everyone in the village celebrated the great festival of the divine appearance of child Lal and were overwhelmed with jubilation. Child Lal was nursed with profound love and care by his family.

One day, parents with child Lal went to a great sage astrologer for name giving ceremony. The sage studied the child’s zodiac signs and gave him the name ‘Lal’ and foretold that “ He is a divine child with brilliant radiance on his face and all the signs shows that the Supreme Lord has appeared with all his transcendental qualities and opulence to establish Dharma and deliverance of his dear devotees. He will be like none in his name, fame and influence and will bestow eternal liberation from bondage of birth and death”. During his childhood, he took the cows for grazing, unlike other children while grazing his cows he used to question himself about the spiritual truth. There he started developing the insight and looked at the nature for his answers. One day in the midst of beautiful sunrays and soothing wind, he went to sleep. In spite of the intense heat of the sun child Lal enjoyed the sound sleep. It is said that God himself protects the pious souls. Unable to see this, God disguised himself in the form of ‘Sheshnag’ and protected the child Lal from the extreme rays with his hood like an umbrella. The mahatmas passing from there were bio 02wonderstruck to see ‘Sheshnag’ and the child’s face. They could predict that this little child has mystic energy. The child Lal woke up because of noise and commotion and was surprised to see one of the aged mahatma cooking rice instep both of his feet, making hearth of both feet. Mahatmas had their food and offered three cooked grains of rice to this innocent child. After having that the child could feel the presence of immense divine light in his heart and immediately the system of the universe became unfolded to his comprehension. Lal was immersed in this state for a long time. He then saw the holy saint and his devotees had left. This holy saint was his Satguru Chetan Swami.

He had the insight and became detached to the world. His heart longed for ultimate goal of life. He left his home at the age of 8 in search of his Guru Chetan Swami and went to Lahore. From Lahore he went to Behra, Gujranwala, Sialkot, Riyas, Rajouri, Kashmir, Mansarovar (Kailash Parvat) and then moved towards Badrinath and Kedarnath. He roamed in the deep forest, mountains and on the banks of rivers among wild animals and birds without fear.

One night child Lal in a dream could visualise his Guru, the supreme soul is calling him, and advised him to go towards his home. Following the instructions, he went to Punjab. On reaching Lahore, near Shahdra at the bank of river Ravi he had darshan of his Guru Chetan Swami which was of incalculable value.

On child Lal’s request Guru Chetan Swami accepted him as his disciple and initiated him in the article of his faith. For testing Bawa Lal ji to become a teacher, which was miraculously proved when once Bawa Lal ji was sent to Dwarka by his Guru to procure some of earth, called ‘Gopichandana’. He completed his mission in less than an hour. This miraculous rapidity, distance of being some hundred miles covered in such a short time, tested his proficiency.

Shri Bawa Lal ji reached Saharanpur after completing his education and pilgrimage to various religious places. He cherished this place and started residing there, always immersed in an ocean of transcendental reality. While residing in Saharanpur, every day Shri Bawa Lal ji visited Haridwar in the form of ‘Suksham sharir’ to take bath in the holy river Ganga. Compelled by His steadfast devotion, Ganga ji appeared in his dream and pleased to tell, “From many years you regularly come to take bath in the holy water of river Ganga but now onwards there will be no need for you to travel so far.” She advised him to leave his Kamandal, a ‘wooden pot’ at Haridwar. Shri Bawa Lal ji followed the instruction leaving his Kamandal on the bank of river Ganga at Haridwar. The next day Ganga ji, returned his Kamandal and asked him to drop water in the east direction. With the fall of water Ganga ji manifested herself in the form of a stream in Saharanpur. Today, also this sacred stream flows and is famous in the name of ‘Paon Dhoai Ganga’. He lived at Saharanpur for hundred years and performed severe austerities for the welfare of the whole world.

He ineluctably attracted large masses of people wherever he went. Due to increase in the number of devotees, he decided to move towards Punjab. And at Kalanaur, near Batala, he found peace, where in river Kiran he performed great tapasya, by taking ‘Jal Shaya asana’ remaining in water for many years.

His skin became loose and deteriorated. With his miraculous power, he transformed himself into a youth. This unimaginable scene was witnessed by Dhiandas, a disciple of saint Dadu. He was overwhelmed with transcendental bliss to see the supreme personality and started living with him, under his shelter. Dhiandas had pure devotional love which is beyond comprehension for Bawa Lal ji. Thousands of people thronged to join Shri Bawa Lal ji’s prayers, sankirtan and spiritual discourses. Dhiandas felt the need of hermitage for Bawa Lal ji as there was immense increase in number of devotees. He searched for the secluded place for ashram with Shri Bawa Lal ji’s consent. He was able to find a beautiful place near Kalanaur and built a hermitage for Satguru Shri Bawa Lal ji.

In A.D. 1495, Shri Bawa Lal ji arrived at this place with Shri Dhiandasji, Shri Gurumukh Lal ji and Shri Kashi Ram ji and was so impressed with the beauty and calm atmosphere that he gave it the name ‘Dhianpur’ after the name of his disciple Dhiandas.

Shri Bawa Lal ji initiated people in his faith by giving diksha of divine Guru Mantra. He did not differentiate and considered people from all religions alike. Both ascetics as well as householders became his devotees, and developed firm faith in him. Those who took the divine darshan of Shri Bawa Lal ji, or heard his spiritual discourses, or recited the divine Guru Mantra experienced the enlightened state and the blissful love of Paramatma.

During his journey he established twenty two Gaddis of Bawa Lal Sampraday and appointed his prominent enlightened disciples to each of these Gaddis, to redeem the world from sufferings, abolish the darkness of ignorance through gyana and vairagya, distribute the immortalising nectar of bhakti and grant ultimate salvation.

Shri Bawa Lal ji’s glory and sovereignty spread ubiquitously. He returned to his divine abode Dhianpur after the completion of his journey.

Once when Prince Dara Shikoh, elder son of Mughal Emperor Shah Jahan, was depressed and did not have the courage to face his father Shah Jahan due to the defeat in Khandhar battle in A.D. 1653. He started residing in Lahore. Looking at his depressed state Shah Jahan’s Mirmunshi Chandra Bhan Brahman advised Dara Shikoh to meet Shri Bawa Lal ji. On hearing his praise, he was influenced and wanted to have darshan of Shri Bawa Lal ji.

After his meeting with Shri Bawa Lal ji, he got attracted by the divine influence and was inspired by his mystical teachings. He held a series of interviews, in the form of dialogue with Shri Bawa Lal ji and discussed with him about the life of the ascetics, relationship between the guru and the devotees, the circles of life and death, idol worship, path of spiritual salvation and various other topics.

Once Shahjahan in his meeting with Shri Bawa Lal ji desired to see the ‘parlaya’ (annihilation) and ‘maha parlaya‘ (the final destruction). Shri Bawa Lal ji ,with Shahjahan and his four sons and few devotees climbed on the ‘Samman Burj’, a high tower of Red Fort of Delhi. Then Shri Bawa Lal ji said, “Look, the parlaya (annihilation) is coming “. Firstly it rained the pieces of wood, then fire and its sparks. The flames outstretched as high as ‘Samman Burj’. People were scared and started shouting. Then it started raining. The whole place was flooded; the water almost touched the top of the tower. People could see their end. Shahahjahan requested Shri Bawa Lal ji to save them. Then they saw a boat in front of them. Shri Bawa Lal ji advised the Badshah Shahjahan to permit the people to be on the boat. The impure souls boarded the boat which drowned at some distance. Only Shahjahan, his four sons and few devotees were saved.

Shahjahan developed a profound respect for Shri Bawa lal ji and held complete faith in his words. Once Shahjahan gifted gold coins to Shri Bawa Lal ji. Shri Bawa Lal ji asked him to close his eyes. On doing so he saw the whole land glittering with gold.

Once Shahjahan was inquisitive to know which of his son will be the next heir of the throne of Delhi. He requested Bawa lal ji to solve his inquisition. Shri Bawa Lal ji spread his sacred cloth (Godari) and asked Dara Shikoh to sit on it, to which he refused saying that he has no courage. Then Shuja and Murad also refused following their brother. Then Aurangzeb was ordered. He got up, bowed at the feet of Shri Bawa Lal ji and sat. Shri Bawa Lal ji told Shahjahan that he had spread the seat (throne) of Delhi to which only Aurangzeb agreed while all others refused. But to this Shahjahan was unhappy. Shri Bawa Lal ji warned him that the consequences of his refusal would be disastrous.

Shri Bawa Lal ji did not visit Aurangezeb on his repeated invitations. Due to Shri Bawa Lal ji’s refusal to his invitation, he got furious and decided to visit Shri Bawa Lal ji in Dhianpur with his few attendants. When he reached Dhianpur and as soon as they stepped to the entrance of Dhianpur, they all got blinded but on looking back they were able to see. This happened several times, on their repeated attempts. Aurangzeb with all his attendants got afraid and apologised for their mistake. He then submitted himself before Shri Bawa Lal ji and asked for his forgiveness.

In Dhianpur, when Shri Bawa lal ji completed his mission on earth, he revealed that he eternally manifest and resides in his enlightened disciples and will continue to be present on this planet through succession of his divine successors. In AD 1655 (Kartik Shukla Dasmi VS 1712) accomplishing the purpose of his incarnation, he returned to his eternal abode.